Why the negative connotations must be dissolved.

From a western health perspective, the word ‘menopause’ carries a myriad of negative connotations. It is feared, it is loathed, it can also appear as quite a daunting time for many women.

In our humble opinion, the connotations are such due to the fact that there are very minimal solutions out there for women to achieve reprieve from menopausal symptoms. Therefore, many women suffer through menopause.

When a woman’s body is imbalanced during menopause, symptoms can be vastly exacerbated.

That’s why we hear some women go through menopause with very little to no obvious negative symptoms.

So let’s take a look at how traditional Chinese medicine views menopause and how it hopes that the connotations can someday evolve.

“In Traditional Chinese Medicine (TCM), the transition into menopause is known as ‘Second Spring’ as a woman moves into wholeness. It beautifully represents what a powerful rite of passage this is. The three most important phases in a woman’s life are menstruation (known in TCM as ‘heavenly waters’), childbirth and menopause. Rather than being something to look forward to, Western culture has tarnished menopause as a negative experience full of horrible and haphazard symptoms. Entering our ‘Second Spring’ does not mean we need to be difficult. If symptoms present, then it’s usually our bodies’ way of waving a red flag to tell us something is out of balance. The key being, to find balance with physically and emotionally.

Our bodies flow with the seasons – deeply connected to nature and our environment. We grow, we age, and we change; every moment of every day. When our periods cease our body is trying to slow down, not wither with age. It is not a decline; it is a preservation of our ‘Yin’ and blood. This transition should be celebrated and not feared.

It’s due time we stop thinking of menopause as a ‘disease’.

As a way to understand what is happening from a TCM perspective when we are peri-menopausal or menopausal, we need to understand the mutual relationship of yin and yang. Yin and yang are the two complementary interconnected and interdependent forces that makeup everything in the universe.

If symptoms of menopause are present, then there is fundamentally an imbalance of yin and yang.

Yin represents the feminine, nighttime, our sex hormone oestrogen and is cooling with a more passive energy. Yang, in contrast, is more masculine in energy representing daytime and our progesterone. It is a much more warming, active energy. You can imagine that if our oestrogen drops too quickly our yang is relatively excessive, causing issues.

Most women find they have symptoms because their yin is deficient (hence symptoms of heat, insomnia and dryness). It is also important to note that, as we age, our internal energy declines in both quality and abundance which can cause fatigue. Stagnant Qi can cause emotional issues like feeling stuck, angry and irritable.

And when there’s a deficiency of blood and yin, blood can’t nourish our heart and mind causing feelings of depression and lack of motivation. Emotions are simply energy (or Qi) in motion”.

Yours in balance,
Your Tea
Traditional Chinese Remedies 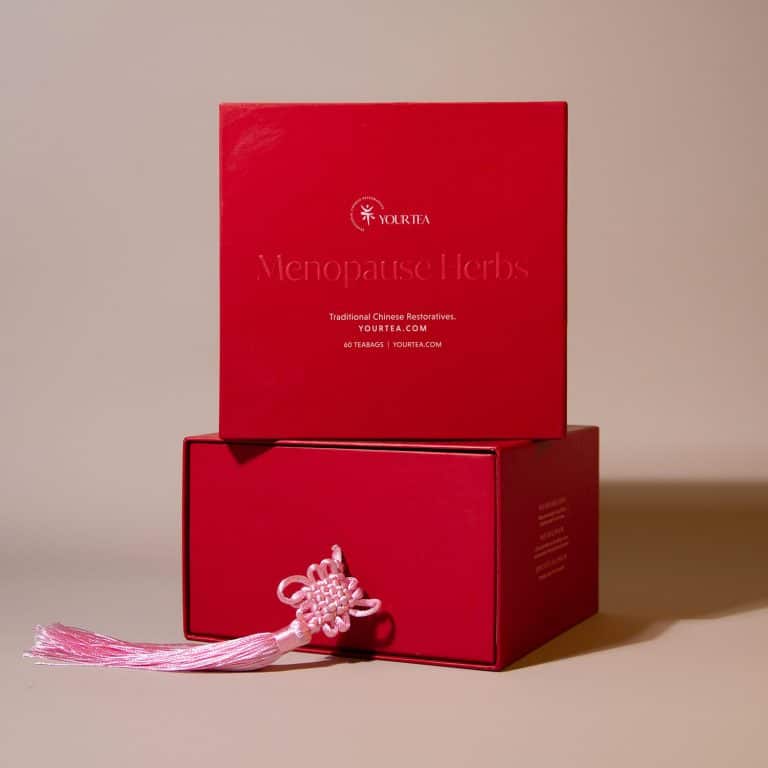 Our Menopause Herbs blend is designed to bring balance to a stage where the body naturally, becomes imbalanced. The primary feature of this blend is that the herbs aim to ground floating yang in the body; this is where we see issues like hot flushes, irritability, night sweats and a hot, cranky digestive system. This ingredients in this blend are traditionally known to support changes in libido, skin breakouts, weight change and fatigue.